NASA Wants You! Turn Your Sci-Fi Gadgets Into a Reality

Home Geek Salad NASA Wants You! Turn Your Sci-Fi Gadgets Into a Reality 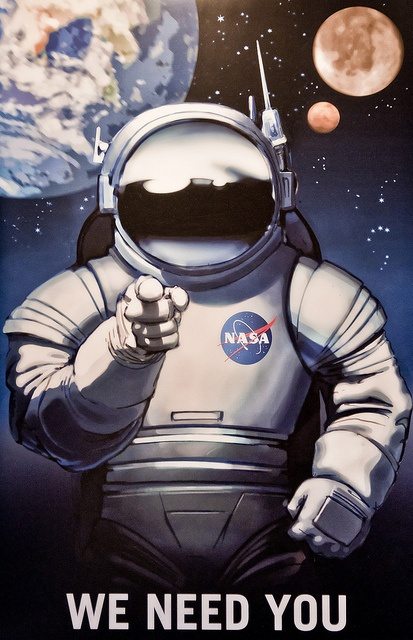 NASA Wants You! Turn Your Sci-Fi Gadgets Into a Reality

Get me to space!

Since NASA has opened its collective inbox for crowdsourced space inventions, I’m asking you to create a way to get us beyond the moon in something larger than a port-a-potty. (Seriously, those poor astronauts).

NASA’s  launched iTech, a program to inspire innovation from new sources as we explore deeper reaches of space.

I’m what some call an “armchair astronaut.”  I have no aspirations of strapping myself in to an explosively propelled tin can, but I sure love space travel. Since much of our tech advances have been inspired by sci-fi, it stands to reason that I’m talking to the right people.  Where are my Trekkies sitting on a white paper plan for life support in sub-zero temps so we can colonize Jupiter’s Europa?

I’m not made for the early stages. Talk to me when you have a sustaining cruiser to take me around the solar system. Then I’ll be able to step into my dream job: an intergalactic Rick Steeves.

A couch colonizer like me needs the gadgets a la “The Martian” so I can shower and eat my potatoes with ketchup when I visit Mars.

But really, the window is open from now until October 17, so get cracking. NASA will choose the top ideas for an interview with their creator. Think life-support systems, propulsion, etc.  The end game is funded research to build your creation; an inventor’s dream come true. Learn more and submit your ideas here.

Until then, here are some sci-fi inspired gadgets to get your juices flowing. 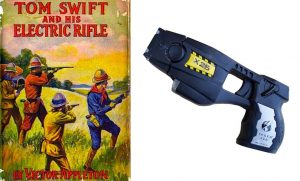 The Taser came from the novel Tom Swift and his Electric Rifle by Victor Appleton, a bullet-free weapon that could be used to simply stun enemies.  It jumped from the pages of YA scicence fiction about a boy inventor to the scientific lab of a NASA physicist.  When airplane hijackings became a rising concern in the 1960’s, Taser inventor Jack Cover saw a need for a weapon that wouldn’t endanger the electrical equipment of the plane or other passengers.  Is the whole name just an acronym for “Tom A. Swift’s Electric Rifle?” 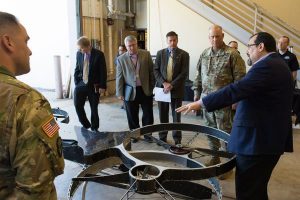 Now that the year for Back to the Future hoverboards has passed, we’ve only seen a basic prototype that’s limited by a magnetic arena.  But there’s hope.  The army is developing a Joint Tactical Aerial Resupply Vehicle (basically, a hoverbike).  Now, don’t go thinking it was the Return of the Jedi speeder chase that started this.  As early as 1950’s, the army was brainstorming new ways to get soldiers into the air.  Now we just need it to get to us civilians. 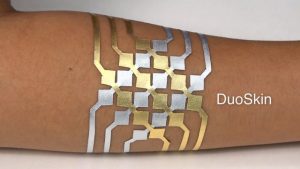 What about changeable skin as a fashion trend like in The Hunger Games?  No longer just for people of the Capital, MIT is developing Interactive Wearable Gold Leaf Jewelry in partnership with Microsoft.  With these temporary-tatoo-like prints, you could use your own arm as an interface with an app.  LED lights and tiny batteries could also create pulsing lights that can sync with music or your own heartbeat.  Popular science has the details here.