Filmmaking According to Damien Chazelle

Home The Director's Chair Filmmaking According to Damien Chazelle

Filmmaking According to Damien Chazelle

The leaves are changing colors, a chill is finally settling in at night, and all the hipsters are breaking out their lumberjack outfits again, all of which can only mean one thing: we are getting closer to Oscar-Bait Season.  This is the time of year when hollywood schedules the releases of all their “best” and most “artistic” films, to ensure they are fresh in the Academy’s mind come January.  One of these films, La La Land, stars faces you know and love, but comes from the mind of a writer/director you may not recognize… yet.

Damien Chazelle has very few credits to his name, yet he will be one of the directors to follow into the future.  His most recent (and only his second) film, Whiplash (2014), received five Oscar nominations (and won three).  Chazelle’s third feature, La La Land, debuts this December, and critics have already lavished it with their praises.  But what makes this young and inexperienced artist one worth watching, and what about his approach to filmmaking sets him apart from others?  I believe there are two things: 1. His concern for story, 2. His concern for characters.

It is possible to boil Whiplash down into one sentence, and even (perhaps more importantly) 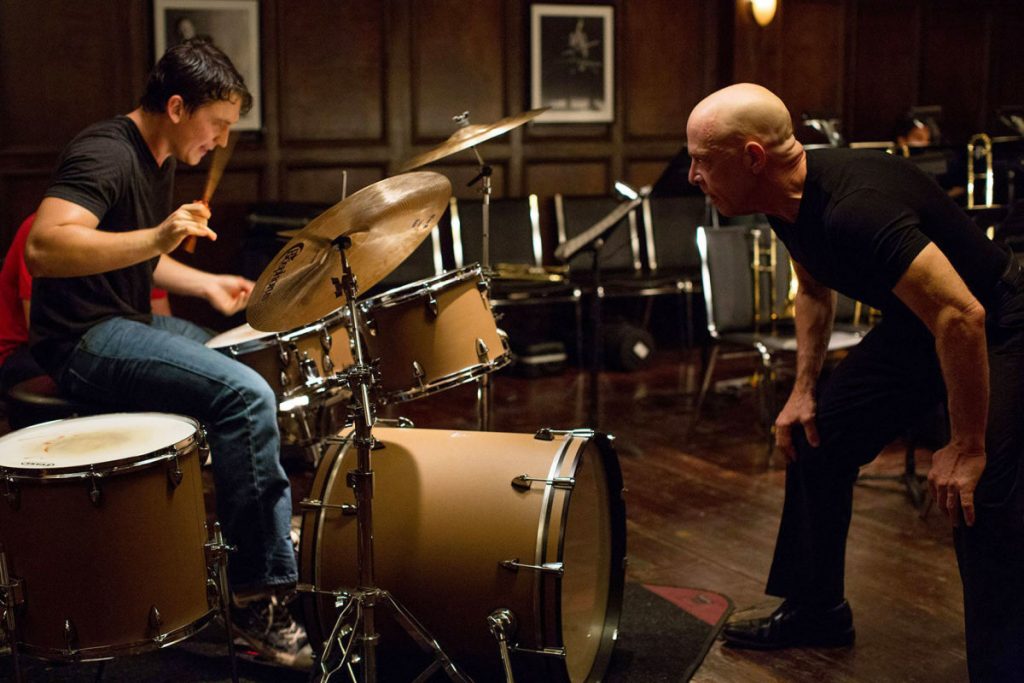 one picture.  An obsessed and ruthless music teacher pushes a student to the edge of sanity to obtain greatness.  The whole film revolves around that one relationship, which could have been horrifyingly dull.  Instead, the 107 minute film feels more like a thriller than a drama.  That’s because Chazelle cares so much about trimming the story down to the bare necessities, and because he had two very skilled actors to portray the characters.  He also follows the director’s mantra: “Show the audience, don’t tell the audience.”  Extensive amounts of script and footage were cut from Whiplash because they told instead of showed.  Additionally, Chazelle used the talents of his stars, Miles Teller and J.K. Simmons to convey feelings and emotions through their eyes and facial expressions as much as possible.

Although these are simple and not revolutionary approaches to telling a story on film, many directors struggle to implement them well and instead create bloated or disjointed films about characters that feel fake and one-dimensional.  Damien Chazelle excels where much of hollywood struggles, and for that reason, you should watch him and his work into the future.  La La Land will likely receive another half dozen Oscar nominations, proving, once again, that experience and money do not a great film make.

If you are interested in an interview in which Chazelle explains what he cut from Whiplash and why, the following interview contains some interesting information (beginning around 31 minutes) https://www.youtube.com/watch?v=beWp2XCQDHQ