Can You Be Both An Artist and a Mom?

Home Culture Can You Be Both An Artist and a Mom? 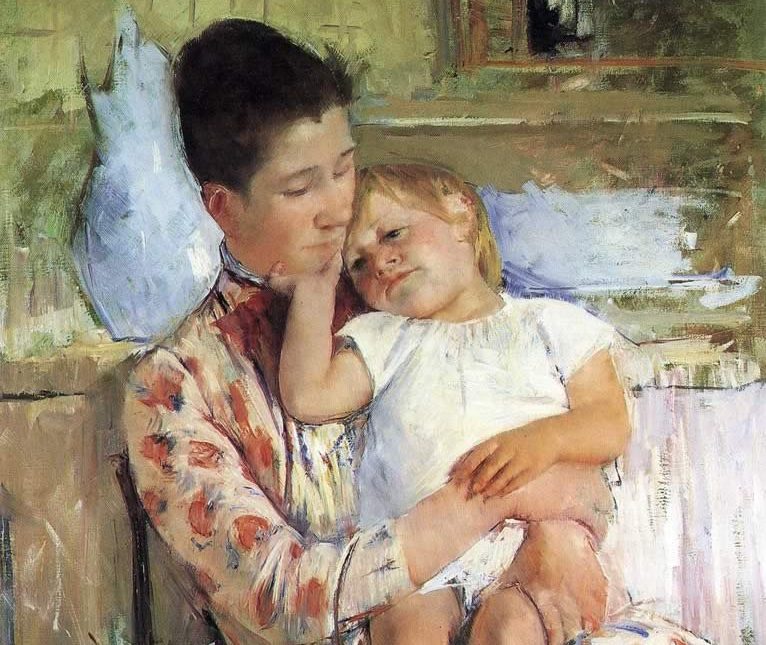 Can You Be Both An Artist and a Mom?

I hadn’t thought of this question in years. But the other day this essay from Marina Cashdan popped up in the Artsy news update in my mailbox. Cashdan has had an impressive career as Editorial Director at Artsy and former Executive Editor at Modern Painters. She studied at Barnard College and Columbia University. But the thing that I noticed before anything else when I looked at her Facebook page were all the lovely pictures of her family, most particularly those of her and her baby.

It may be hard for my young artist friends to believe, but the question of having an art career or motherhood was a huge topic of discussion 35-40 years ago during the feminism of the 1970s.  We were so earnest. What was that about? Certainly a self-consciousness about the changes taking place in women’s lives. A desire for independence. The odd idea that you had to sacrifice for your art to be good. A belief that art was supposed to be the most important thing in your life. I guess we picked up these attitudes in graduate school. Or somewhere.

If all this sounds strange, imagine my being confronted on several occasions back then as someone less serious about my work, because I wore makeup and dressed up for openings. Hard to believe, isn’t it? They should have been grateful I wore the makeup. Times of transition can get a bit extreme.

The article reminded me of Bette C. Graham, typist, commercial artist, the inventor of Liquid Paper and mother. She founded the Gihon Foundation and around 1980 formed a collection of work by women artists that included my own work.

For years that collection traveled to university galleries and museums throughout the United States in support of women in the arts. It was a heady experience for this young artist to be shown next to Mary Cassatt, Georgia O’Keeffe, Janet Fish, Helen Frankenthaler, Nancy Graves, Lynda Benglis, Louise Nevelson and others.

The Gihon Foundation produced and distributed a documentary film as part of that effort. Picture what it was like having a film crew from the east coast in our small East Texas town. During filming and interviews, their focus was the topic of being a women artist. I know at least several of us were asked the big question about a woman’s ability to be both an artist and mother. It was so long ago, I don’t recall what I said. I hadn’t figured it out. Looking back, that expectation seems like a price too high to pay, but that was the spirit of the age.

I thought it would be helpful to ask a few friends their thoughts on the question:

Artist, Gail Siptak: In the early 80’s I felt I had to keep my “other” life of family quiet in order to be taken seriously. I came out (so to speak) when I was invited to a self portrait show show at Midtown (Gallery), where I did a big (family) piece full of humor and zing. I was happy to see 20 years later great acceptance of family with other younger artists. I was also working at least two jobs. The kids turned out great but declined a painter’s life.

Writer/editor, Mary Kenagy Mitchell: I feel like now, among my women friends, there’s a lot of openness about how hard it is to do both (mom+artist, mom+writer, mom+doctor, mom+pastor or any demanding job), but not in a way that has people second guessing their choices much. I think we all just agree that no matter what path you choose, it’s going to be hard. It’s actually something I’m really grateful for; it feels like it’s okay to complain and people won’t say, “Oh, aren’t you a wacky and unrealistic feminist for trying to have it all in the first place,” or “Isn’t it sad you gave up your dreams,” or “That’s what you get for putting career ahead of your family” — which I suppose is not something women could take for granted thirty years ago. I think part of it is that from what I see, there’s no way having kids isn’t a sacrifice: close friends who are mostly just home with the kids have their own struggles, too. I feel like the mommy wars, with women snarkily judging each other, are alive and well on the internet, but I feel like the internet is the ONLY place they’re alive and well.

Artist, Jim Janknegt: Becoming a father is the best thing that ever happened to me (along with marrying my wife of course). It impinged on the amount of painting I could do for quite a few years as I chose to spend time with her instead of paint. But before too long I was back to painting. I don’t regret for a single second having my precious, beautiful daughter. Children are a great gift, even if there is much difficulty involved. There are just some things in life you will never learn or experience if you do not have children.

Owner/Designer at KSR DESIGN, Kathy Saunders Rogers: Finding the right balance in our careers and family is a difficult experience for anyone who cares deeply about both, but is made easier by a support system of family, friends, and spiritual guidance. Sacrifices must be made at different times and in different ways, and often times one takes a backseat to another. The creativity God has blessed us with can take on many forms in many ways, and enrich the lives of others while we are on this earth. A lot depends on what our ultimate goal is. As it has been said ‘begin with the end in mind.’

Sometimes we get so caught up in the times in which we live, we forget that none of this is really new. Take a look at these extraordinary artists and their work: 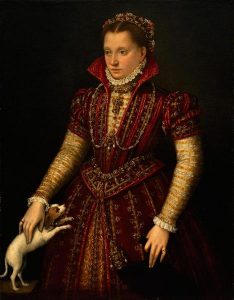 Lavinia Fontana,”Portrait Of A Noblewoman,” oil on canvas, 1580, National Museum of Women in the Arts, Gift of Wallace and Wilhelmina Holladay

Dutch painter, Rachel Ruysch (1664 – 1750) was married to painter Juriaen Pool, with whom she had ten children. 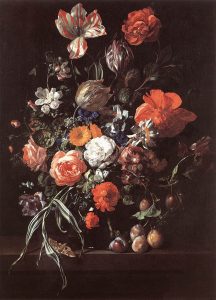 Rachel Ruysch, “Still-Life with Bouquet of Flowers and Plums”, oil on canvas, 1704, Royal Museums of Fine Arts of Belgium

In 1636, Judith Leyster and her husband, painter Jan Miense Molenaer, shared a studio and had five children. 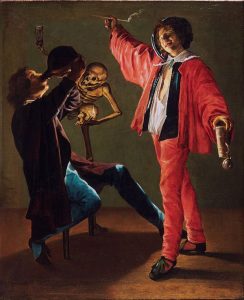 On the other hand, Italian painter, Giovanna Garzoni (1600-1670) remained single, choosing instead to travel and pursue an education instead of “settling down.” 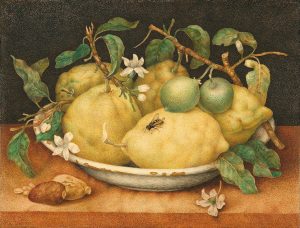 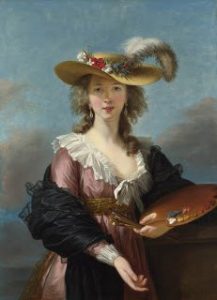 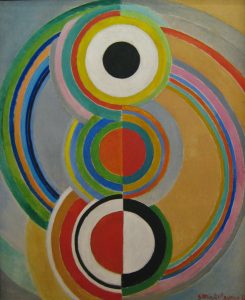 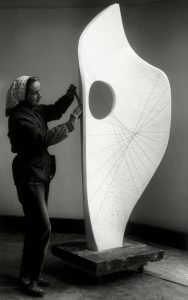 American sculptor and printmaker, Lee Bontecou (1931-) has a daughter. 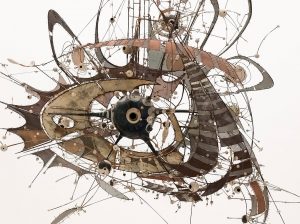 Detail from an untitled work, 1980-98, by Lee Bontecou, from MoMA’s permanent collection. Credit The Museum of Modern Art 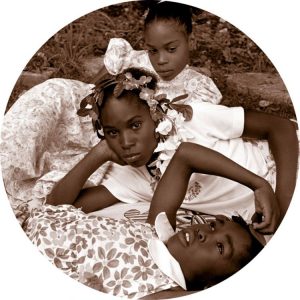 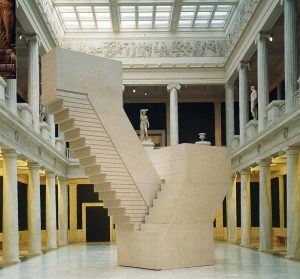 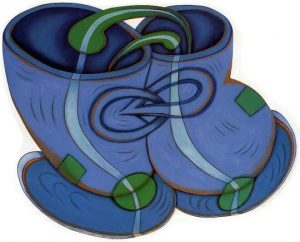 Looking back, I am grateful I decided to be a mom. I wouldn’t trade my son for anything in the world. 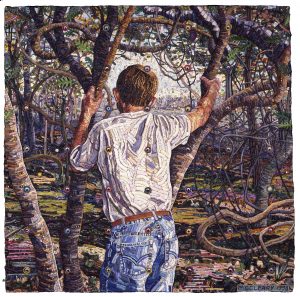 The painting at the top of this post is of course by Mary Cassett, an artist who never married or had children, but whose paintings of mothers with their children are some of the best.

Want to read more about the struggles of artists being fathers? Here’s an article about Marc Chagall and his daughter.