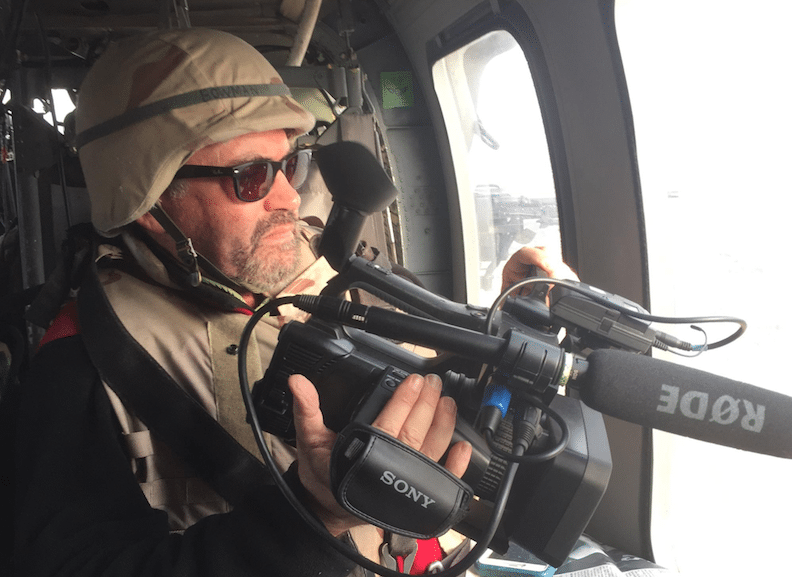 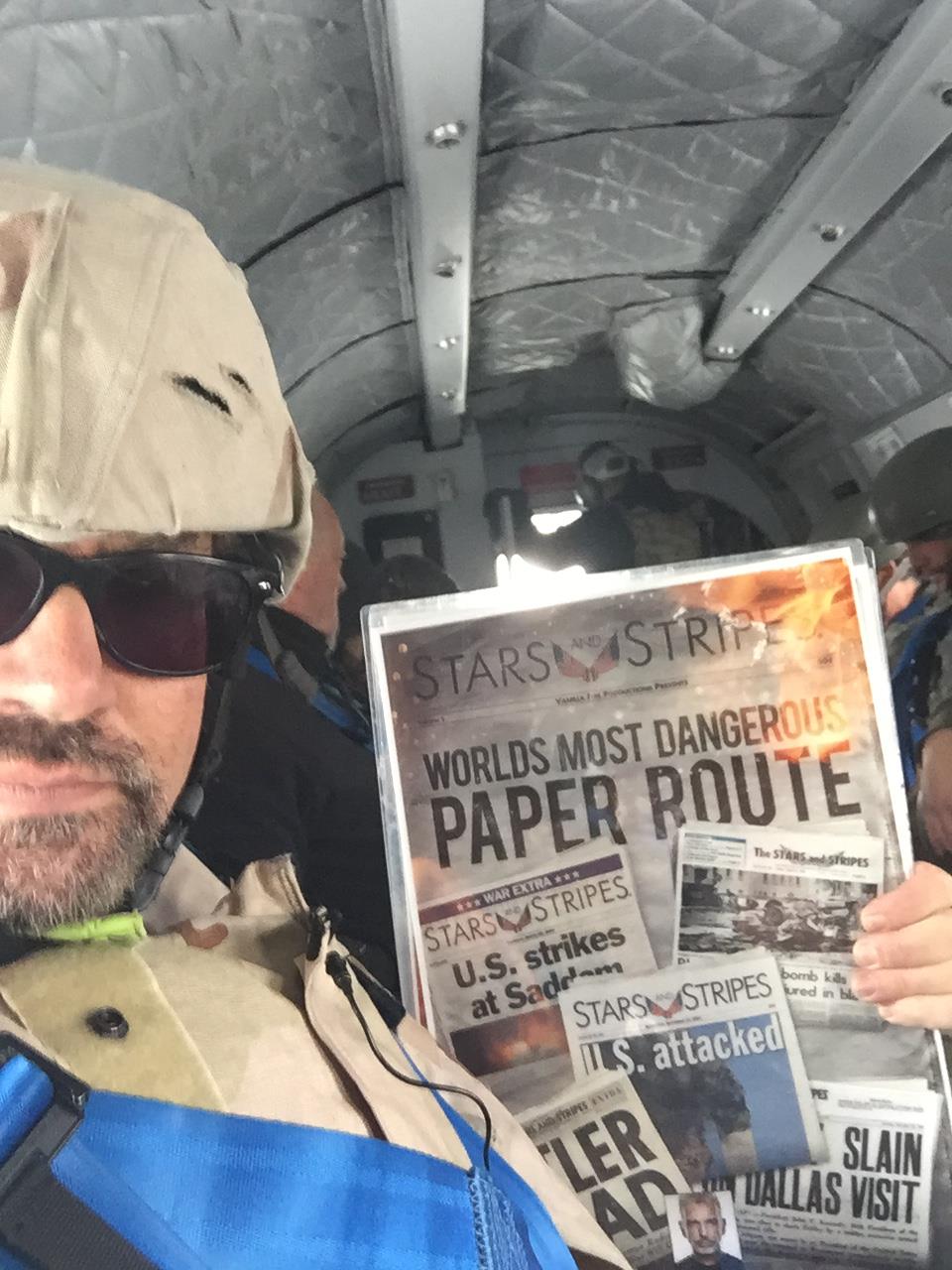 Steven Barber didn’t set out to be a Hollywood filmmaker. Quite the contrary, he describes his journey as a “serendipitous” ride (both literal and figurative) that led him into an unpredictably wild career. Now, with seven feature length documentaries and three documentary short films to his credit, the Vanilla Fire CEO is living the dream—even though sometimes raising money to support his craft can be a nightmare.

But mostly, it’s the hard-to-believe moments in his career that keep him going—like working with A-list narrators such as Dan Aykroyd, Ed Harris and Steve Kroft, and hobnobbing with every kind of celebrity and political figure imaginable (Billy Bob Thornton withstanding).

In this Q&A with SCENES, Barber talks about his unplanned foray into filmmaking, his unexpected love affair with military-themed stories, his latest film The World’s Most Dangerous Paper Route, and how a random encounter with the aforementioned Thornton impacted a major storytelling decision.

SCENES: How did you get into filmmaking?

Steven Barber: That was all God. 20 years ago I went by Eddie Albert’s house on a mountain bike. Of course Eddie Albert is famous for starring in Green Acres. I met Eddie that day and we struck up a friendship. I found out that Eddie had fought in the Battle of Tarawa and saved a bunch of lives. This was back when movie stars went to war. Jimmy Stewart flew 25 bombing missions. They were the real deal back then. They were fighting the Nazis. The world was on fire. Everyone contributed.

10 years later I ran into Leon Cooper. He was also a veteran from the Battle of Tarawa. Turns out this guy had a 140 IQ. He was really, really smart and could remember things that happened 65 years ago. He had a photographic memory. He remembered seeing Eddie Albert on the battlefield. He said, “I’ll never forget seeing this movie star dragging Marines out of the lagoon and I was hiding behind my boat on the beach.”

I basically Googled “how to make a documentary.” That’s how it started. He gave me a couple hundred grand. I hired the right people and that movie is still doing really well. It’s got over three million downloads. It’s been seen all over the world. Then I got serious and it’s been game on ever since. This is my seventh feature documentary in a decade.

SCENES: How did you get interested in the military? 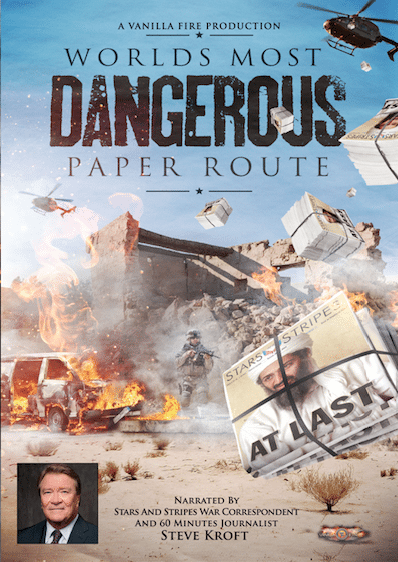 Steven Barber: I went to Augusta Military Academy, which is in Fort Defiance, Virginia, from ’77 to ’79, and I just hated it. It was just horrible. I had no interest in the military whatsoever, but it would serve me 40 years later because all of the guys I went to military academy with were lifers. They went to Augusta and from there went to West Point or the Naval Academy or VMI. But I hated the structure and being told what to do. There were no chicks. It just sucked.

But when I ran into Eddie, to me it was just a divine providence thing. It was too perfect. It’s still to perfect. I’ve been sober for 17 years. The reason I’m sober is because I pulled into a hotel at seven o’clock in the morning to do a sales call. I was selling advertising. I saw a beautiful blonde haired girl there and I hit on her and we had this love affair and she dumped me because she said I was a drunk and that’s how I got sober. I wasn’t going to go into the hotel that morning. I wasn’t going to take that bike ride the day I met Eddie Albert. It never occurred to me to quit drinking. We wouldn’t be talking today. I’d be dead now. I didn’t know I had a problem. I didn’t know I was a drunk. I had no clue. But power made me go in that hotel that day and meet that girl and that girl was the girl that saved my life. We all have those epiphanous moments where you were gonna take a left when you should’ve taken a right and thank God you took that right.

SCENES: How did you find the story that became your latest film, The World’s Most Dangerous Paper Route?

Steven Barber: This one found me. Stars & Stripes did a story on me back in 2010 when I had the move Until They Come Home and then they did another story on me in 2015. So once again, it was just another one of those serendipitous things. So I was in Tokyo and Stars & Stripes did another story on me and my work. He was a couple hours from Tokyo at Yokota Air Force Base and he came in to meet me for the interview. His name was Seth Robson and he’s this big Kiwi guy. We hit it off. He does an interview. And afterwards, I’m looking through the paper and it just dawns on me, ‘Has anyone ever done a documentary on you guys?’ And he’s like, “Oh I’ve always wanted to man. The story is more than you could ever know. And I want to call it The World’s Most Dangerous Paper Route.” As soon as he said that, I was like, “That’s the greatest title I’ve ever heard.” So I asked him what made it dangerous. I didn’t know anything about it. He goes, “Oh man, we’re down range. We’re all over the place. Four drivers have been killed delivering the paper.” That’s how it started.

SCENES: How did you get Steve Kroft as your narrator?

Steven Barber: I walked out of my house one morning and Billy Bob Thornton was smoking a cigarette on my front lawn. Only in L.A., right? I’d met him a couple times before so I asked him if he’d like to narrate the film. He was like, ‘Sure, I’d love to.’ So I got in touch with his people and they said he thought he’d met me at a bus stop and he barely remembered talking to me. I was like, “Thanks a lot Billy Bob.”

That put me in a bind and I’ve always had A-list narrators for my films. I was back in Afghanistan doing some more filming. One night, I was lying in my bunk when I thought about it. Steve started his career with Stars and Stripes. He’s got one of the greatest voices. I had to talk myself into it because I’d already interviewed him for the movie, but it worked out great.

I wanted Billy Bob for the brand. I wanted him because he’s won an Oscar. But at the end of the day, Steve Kroft is a pretty big wig. He’s on 60 Minutes, the number one TV magazine show of all time, and he’s very respectable.

SCENES: Tell me more about the making of the film. 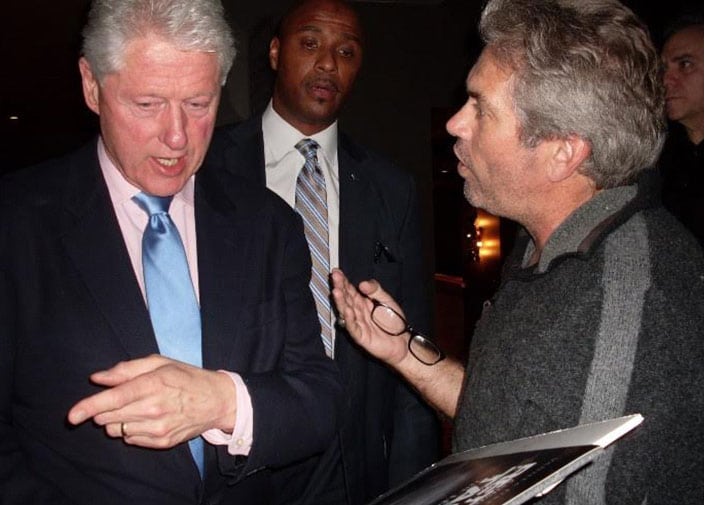 Steven Barber: I probably shot 60 hours of footage for a 60-minute documentary. Out of that, we probably used 45 minutes and the rest was archival. I interviewed 57 people but ended up only using seven of the interviews. I was all over the country in Texas, Ohio, Florida, Appalachia, New York, D.C., and Pennsylvania. We also shot footage in Afghanistan, Iraq, and Kuwait. This is my masterpiece. It’s so good. Laura Rauch is the key to this whole thing. She’s the female combat photographer. I couldn’t make this stuff up. I could have gone in 30 different directions. But I met Laura and she told me about a double amputee named Kyle and I knew I had to find that guy. Those were just some of the incredible moments we were able to capture.

What I want to do from this film is develop a show about combat photographers. That’s never been done. It’s always about the veteran and the guy with the gun. But the guy with the camera is the guy who’s putting is life on the line. He’s got no weapon. He’s out there in the middle of it just like the combat veteran.

SCENES: How has your approach to filmmaking evolved over the past several years?

Steven Barber: The nice thing about the whole filmmaking thing for me is I got out of my own way after the first film. I wrote it. I shot it. I directed it. I did the narration. I did the driving. I did the craft services. I didn’t delegate anything. I was in my own way. I did everything at the premier and by the time the premier was over, I didn’t even see my own movie because I was too busy.

That stuff doesn’t happen anymore. I was the executive producer on this film. I didn’t write it. I didn’t shoot it. I was the visionary. I saw the story and I gave my writer Paul Freedman a template. He took it to a degree that I couldn’t even dream about. He’s a genius. This is our third movie together. He’s part of a team of 12 or 13 people that are the most brilliant, talented people. Everybody who works for me is ten thousand times smarter than me.

SCENES: How has telling the stories of war veterans impacted you personally?

Steven Barber: I’ve worked with so many people that have had high trauma. I worked with a lot of double amputees and guys who have lost so much because of their service to this country. I’ve come to the realization that I have nothing to complain about. I try to put things in perspective. These movies have changed that for me.