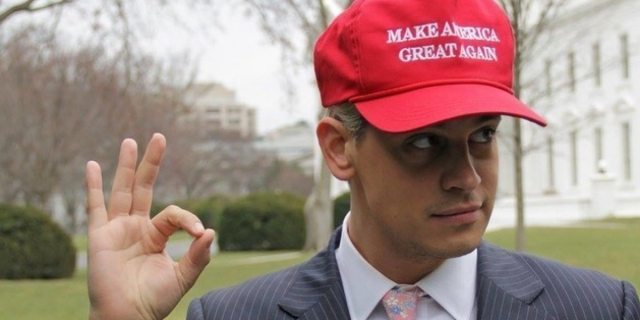 Yiannopoulos (hereafter Milo), gay conservative provocateur, may need no introduction. Indeed, many people might refuse to read his new book Dangerous, even though as of July 28, 2017, it was ranked #1 in Amazon’s “commentary and opinion” books. That would be a pity. The people who would feel most repelled are actually most at risk in the new social media-governed world for which Yiannopoulos, formerly Breitbart’s technology editor, offers insight.

It’s best to begin by clearing away some misunderstandings about Milo. He does not advocate pedophilia. He pointed to a longstanding distinction between sexual abuse of children and seduction of teenagers by gays (he claims that a priest seduced him at the age of 13).

He is certainly not the first person to sense a difference. While it is illegal for a man to have sex with a 14-year-old girl in many Western countries, if she is anatomically an adult, we would not usually call it “pedophilia.” Milo attracted controversy when he made the same distinction with respect to boys.* Dumped by Simon & Schuster and others as a result of the controversy, Milo started his own imprint, Dangerous Books, his being the first. Unfortunately, most of the books he brings out will not actually be dangerous, just books that “your college is too afraid to stock in their library”. That is, they are not necessarily badly written or untruthful books, merely  books that attract increasing crowds of progressive censors.

Milo is also not a “white nationalist.” The term, largely a form of abuse now, has long since lost any precision it ever had, as did the term “alt right.”  For example, he notes, Breitbart News is often said to be “an ‘alt-right’ platform” even though “virtually the entire management team and most senior editors are Jewish” and pro-Israel. Milo is hated by much of the alt right  as well as the progressive left. Traditional mainstream media are in such trouble in the age of the upheld handheld that they are no longer a source of reliable information in these matters

Like Donald Trump (whom he calls “Daddy”), Milo says whatever he wants and ignores the pushback: “The most hated man on the Internet” (The Nation) “Milo Yiannopoulos doesn’t have feelings” (New York Times Magazine) “The ultimate troll… terrifying” (Fusion)  He betters it. He calls himself the “Ken doll from the underworld” and says, “My motto is laughter and war.”

Milo has a clear political philosophy. However you may disapprove his lifestyle and communication methods, I say, maybe listen. If more people had paid attention when controversial 1960s political philosophers turned the big guns against intellectual freedom at universities, campuses would not be so severely oppressive today.

His revelations in Dangerous as to how social media control news are worth knowing. For example:

According to Gizmodo, Facebook’s “news curators” were “told to select articles from a list of preferred media outlets that included sites like The New York Times, Time, Variety, and other liberal mainstream outlets. They would regularly avoid sites like World Star Hip Hop, The Blaze, and Breitbart, but were never explicitly told to suppress those outlets.” He adds, “Silicon Valley companies don’t have to institute policies of bias against conservatives— all they have to do is give minimal oversight to their overwhelmingly left-leaning employees, and turn a blind eye to the inevitable consequences.”

After some controversy, the humans were replaced by an algorithm. But to this day, I have difficulty posting links from Uncommon Descent, an intelligent design community blog, to pro-ID Facebook pages. The algorithm demands answers to puzzles, forcing me to choose between posting more news in a burgeoning field at the original site or else solving puzzles. So I post news at the site that I cannot share on Facebook. Don’t think for a minute that your social media are not doing sneaky things to you too.

Twitter, Milo tells us, is becoming a Sharia-compliant conservative-free zone where audience growth is failing. He was banned from Twitter for dismissing an all-female reboot of Ghostbusters but, he says, “In the two months following the election, social media analytics discovered more than 12,000 tweets calling for the death of Donald Trump—tweets that remain on the platform.”

Here’s something else useful to know:

In February 2016, a source who worked closely with Twitter revealed to Breitbart that the company had been “shadow banning” inconvenient Twitter users and maintained a “whitelist” of trusted news sources. “Shadowbanning” is the sneaky practice of removing or minimizing a user’s posts from public view without alerting the user, who often continues posting, believing nothing has changed. …

Twitter is the Silicon Valley company where progressive bias is most apparent, but Google is the company where it is most dangerous. If Google decides that it doesn’t want web users to find something, it would be very difficult to stop them—or even to find out they did anything in the first place.

Bernie Sanders did not have such luck and it may be relevant that Google CEO Eric Schmidt had struggled mightily to elect Hillary Clinton. His company’s representatives were not only frequent visitors to the White House under Obama but the two institutions frequently traded employees: Intercept “noted 55 instances of employees leaving Google for federal government jobs during the Obama years; 29 of them went to work directly in the White House. Additionally, 127 government employees left their jobs to work at Google.”

But does search engine bias really matter? Research suggests yes, because that the public assumes that the results are not manipulated. Milo offers, “Some might consider conservatives fortunate that tech companies didn’t use all the powers at their disposal to influence the election. Google could, if they wanted to, ban all links to Breitbart, as could Twitter and Facebook. Ultimately, such a bold move would be a bad business decision—in the current climate, conservatives feel just safe enough on social media not to flock to competing platforms.” (p. 70)

In short, in a world where people’s minds are hijacked by phones, “social media bias is more deadly than traditional media bias.”

The irreverent Yiannopoulos recommends, “It may be difficult for 60-year-old politicians who still need their grandkids to unlock their phones for them, but it’s their own political future at stake. Hire an intern, gramps,” adding, “There is no greater danger to free expression and free speech today than the far-left biases of Silicon Valley. Do not let them get away with it.”

Caution: This book is not for everyone. Many will take issue with the language and the morality. But if we need our bearings for the near future, some people should definitely read it.

Note: Some of Yiannopoulos’s critics had issues themselves with respect to sex and kids.

See also: Part 5: How can we defend the right to think for ourselves? You need true grit and a thick skin

Denyse O’Leary is an Ottawa-based author, blogger, and journalist. This essay originally appeared at Mercatornet.com, and is reprinted by permission.