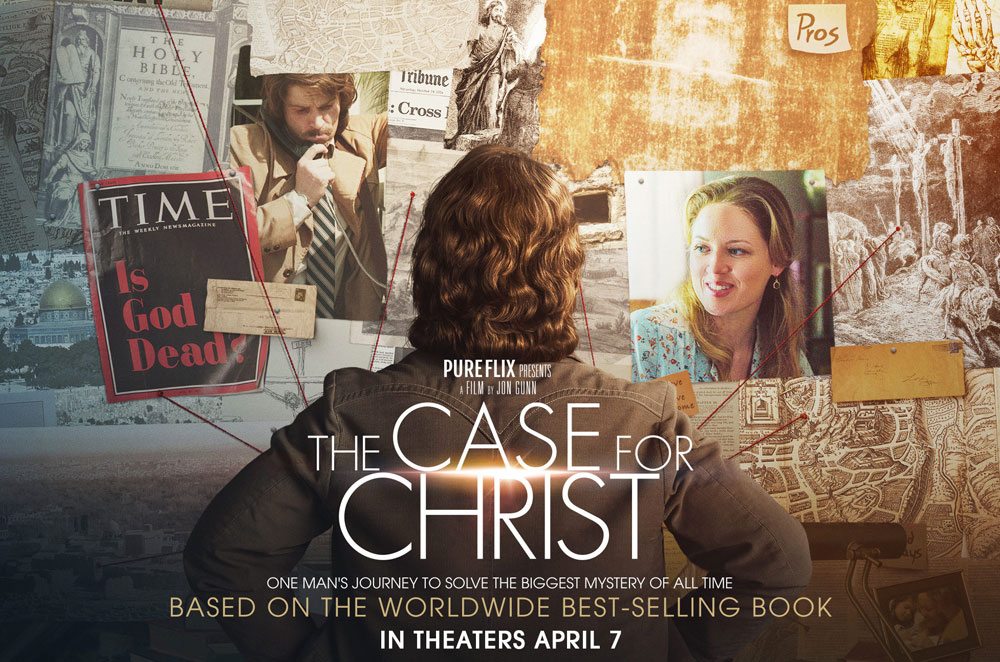 Brian Bird has had a hand in more than 25 movies and television shows over the past three decades – including Touched by an Angel and When Calls the Heart – but his latest project, The Case For Christ, ranks near the top in his book.

Bird was screenwriter for the film, which opens this weekend and follows the story of Lee Strobel’s transformation in the early 1980s from atheist to Christian apologist.

“In my 30 years of doing this work, this is the most significant movie of my career in terms of kingdom impact,” he said. “And I think the results on-screen bear that out – not because I’m such a great screenwriter, but we had a great team on this.”

His faith and his extensive experience with family-friendly content is one reason Strobel asked him to write the screenplay for The Case For Christ (PG). The two also are good friends.

Bird estimates that 75-80 percent of the movie is “on the money” of what happened in real life. The rest of it includes composite characters – that is, a single character who represents several real-life people – and time-shifting. Such tweaks were necessary to make the film not only entertaining but compact.

SCENES recently spoke with Bird. Following is a transcript, edited for clarity:

SCENES: Lee Strobel is your friend, but what else about his story made you want to get involved?

Bird: As anyone knows who has read The Case for Christ, that book is a deep data dive – 13 world-class experts – the world’s foremost leading authorities on the proof for the resurrection. All the evidence for Christianity is there. He was a hard-core atheist and cynical journalist who deeply loved his wife and his kids, and was trying to rescue his wife from herself. She had become a Christian at what he thought was a cult – Willow Creek [Church]. His whole quest was to rescue her and to get her back, because in his mind they had a perfectly happy atheist marriage. And he loved her. So I knew there was a great love story there. He’s the hero of the movie, but he’s an atheist. He’s trying to save his wife. You have some sympathy for that, even if his skepticism is infuriating.

SCENES: You were able to get quite a bit of apologetics into the film. What were the challenges in weaving apologetics without it becoming knee-deep in minutia?

Bird: That definitely was one of the toughest aspects of crafting this – to figure out how much would be too much and how much would be enough, to find the balance. There were 13 world-class experts in the book. Well, we couldn’t cover all thirteen. I knew that we could get away with four or five expert witnesses, but not much more than that. So I focused on what seemed to be the three most cinematic ideas in the evidence – the veracity of the 500-plus witnesses who saw Jesus after the crucifixion, thereby verifying that the resurrection did happen. Secondly, the fact that there was no conspiracy to fake Jesus’ death – that it was not a hoax, that He truly did die on that cross. And thirdly, the authenticity of the ancient manuscripts. We wanted to make the case for Christ, but we didn’t want to give a book to people.

SCENES: But the movie isn’t just about apologetics.

Bird: Right. There were three other big storytelling points in the true story: First, the love story, and second the whole big-city journalism story. Lee actually got nominated for a Pulitzer Prize for a series of stories. Then there was his discovery that all of the great icons of atheism in history had deep father wounds, like him. I knew it could get very dry very fast if it was just Lee talking to somebody in an office somewhere. So we tried to give it a little bit of sense of urgency, like it was a big mystery he was trying to solve. It was a bit of a Da Vinci-code search for evidence.

SCENES: How do you want this to impact people?

Bird: If you’re a believer, you have the cure for everything in the universe. Yet, most of us sit on it. We don’t share it. We just hold on to it. Something’s deeply wrong with that. This movie depicts that cure, and we have the opportunity to share it with people, not as propaganda but as a really good, true story that really happened. It had the impact of eternity on Lee and Leslie Strobel, and can have the impact of eternity on people who watch it. Buy a neighbor a ticket to this movie, and then go out to dinner afterwards and have the conversation that you’ve always wanted to have.