The Hilarious World of Depression 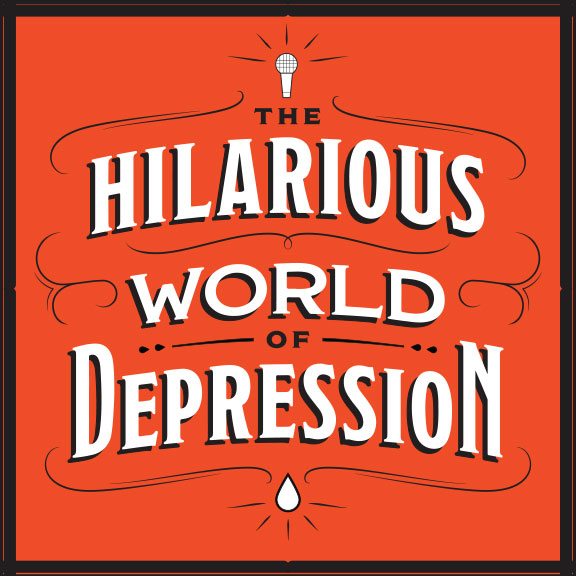 The Hilarious World of Depression

So many people shy away from talking about how they really feel. No one wants to admit when they actually come close to the dreaded D word , and anyone who’s grappled with depression knows that this code of silence serves to make it worse.  Humorist and radio host John Moe tired of the way our society pushes any skeletons resembling mental disorders or mental illness into closets.  His podcast, The Hilarious World of Depression, seeks to make mental illness a non taboo topic and he enlists a variety of comedians such as Andy Richter, Jen Kirkman and Maria Bamford to do so.

One of my favorite episodes is Maria Bamford talks BiPolar II while her pugs eat nilla wafers…yes this is the title. You may recognize Bamford from her show on Netflix called Lady Dynamite. If you haven’t caught it, you should. It’s hilarious! Her website mariabamford.com gives you an unfiltered look inside her quirky world as well. In her talk with Moe, Bamford is open about her struggle since adolescence with depression, anxiety and anorexia. She candidly talks about what treatments worked and which ones haven’t. She serves to put anyone who has suffered with the same struggles at ease.

Comedians have long been cited as having difficulty with depression and often have been through horrific tragedies, finding that comedy helped them cope. Stephen Colbert lost his father and two brothers in a plane crash when he was ten and Tina Fey had her face slashed by a stranger as a child. Chris Rock has stated “If ignorance is bliss then cognizance must be miserable.” The heightened awareness about human behavior that lends itself to jokes also lends itself to seeing the negative aspects of life as well.  It is the double edged sword. The yin and the yang.

At times, the content of the podcast is not for the faint of heart. For example in Sam Grittner finds a funny thing happened on the way to a suicide, the title is not a punchline. Grittner and Moe actually discuss a funny event that occurred when he was on the way to kill himself. If you allow yourself not to be turned off by the dark nature of the content , you will come away with the kind of inspiration that can only come those who’ve mined the black caverns of the soul and made it out into the light again.

Charlie Chaplin was quoted as saying, “To truly laugh, you must be able to take your pain out and play with it.” We benefit from comedians who expose us to their playdates with pain. From them, we learn one of the best lessons you can learn in life,  not to take yourself so damn seriously.