TO AVOID CRITICISM, SAY NOTHING, DO NOTHING, BE NOTHING  – ARISTOTLE

Seinabo Sey’s “I Owe You Nothing” video, released in March of this year, opens with the above, graffitied in all caps, candy-apple red on a transparent plastic sheet spread over a pale yellow wall.

The magnetic 27-year-old Swedish and Gambian singer keeps me interested for the next three and a half minutes.

She leans in, almost leering, and throws the first line and chorus at the camera like it’s something it’s time for you, the viewer … for all of us, out here listening …  to hear: “I owe you nothing/I be myself and I ain’t fronting.” She emphasizes with her hand to her chest.

Close-ups of the exquisitely chiseled, regal African faces of Seinabo Sey and her girls before it zooms back out for her to deliver the first verse. Her whole attitude bites as she chews up and spits out disrespectful, unacceptable expectations of the past – expectations that will be met no more: 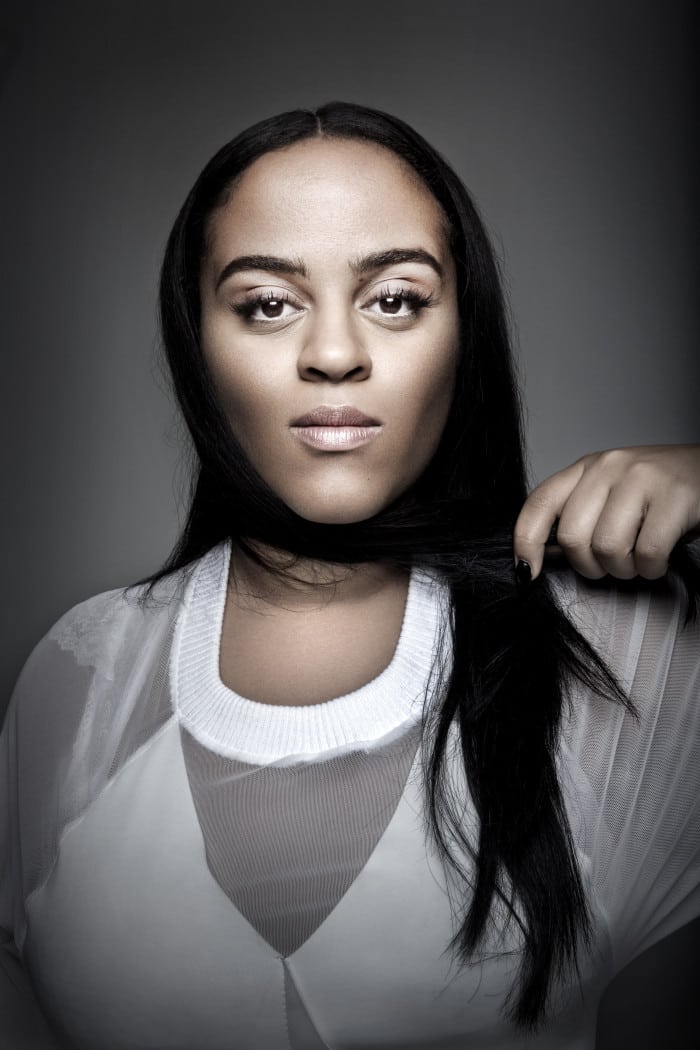 In the next scene, she’s flanked by four soul-searching young and dapper men. They are all dressed fresh to death in Burberry tartan under tailored tweed print suits; Seinabo Sey’s curls are brushed and teased into a majestic sable mane that frames thick dark brows and blood red lips.

She looks pointedly into the camera, sings the next verse: “See, I won’t help you understand, I don’t need no helping hand, no” – and, amidst more pregnant close ups of serious, stunningly well-structured faces, my favorite line of the song: “See, these aren’t tears, this is the ocean/These aren’t fears, this is devotion.”

I am mad inspired by the attitude, fashion, and actors in this music video.

Listening to it sans video, though, I experience a deep rumbling of wielding my own power, in a different way. I highly recommend first watching the video – because it will mesmerize you, and stir you, and show you just who is singing this song … – and then downloading the song for audio. Listening-only bequeaths you with a sense of empowered authority like the video, but without the show-stealing visual of the queenly Seinabo Sey, you can allow the song to apply itself more to you and your life.

While “I Owe You Nothing” has over 1.5 million views on YouTube, two of Seinabo Sey’s other music videos – “Younger” and “Hard Time,” published in early 2014, have 4.5M and 4.7M views, respectively.

The cinematography of “Younger” will give you absolute chills – and the song itself might actually beat “I Owe You Nothing” as my choice Seinabo Sey jam – its lyrics are prophetic:

“There is a way to be yourself, I assure you this/There’s a way to catch your dreams without falling asleep/You might as well get it while you can, babe/’Cause you know you ain’t getting any/Younger, younger, younger, are you?”

While “Hard Time” might just be in my top three music videos, of all time, ever. It’s spooky, trippy, scary, dark, hypnotic, silky, mystic, bewitching … with definite feminine magic vibes, and takeaways like, “This time I will be/Louder than my words/Walk with lessons that/Oh, that I have learnt/Show the scars I’ve earned/In the light of day/Shadows will be found/I will hunt them down.”

In a 2014 article published by the UK’s Independent entitled “Who is Seinabo Sey? Introducing the Swedish-Gambian singer inspired by her dual identity,” Seinabo Sey says she loves “Speaking to people. How things always seem to fall with bad communication and not being able to express your emotions and I struggle with that every single day. It seems like everything is always alright if you speak up and say what you really feel.”

She spoke to me, and I am glad she is speaking to the world.

I’m speaking up to say I really am feeling Seinabo Sey.

Virginia is a writer + multimedia storyteller born, raised, & based in wild northwestern Wyoming. Ever curious & game for adventure, she's keen to travel as far & wide as she can, meeting characters, experiencing culture, & capturing + sharing stories all along the way.
Read More
Read Less
More from Virginia Schmidt
After a battle with pancreatic cancer, the Queen of Soul died Thursday....
Read More