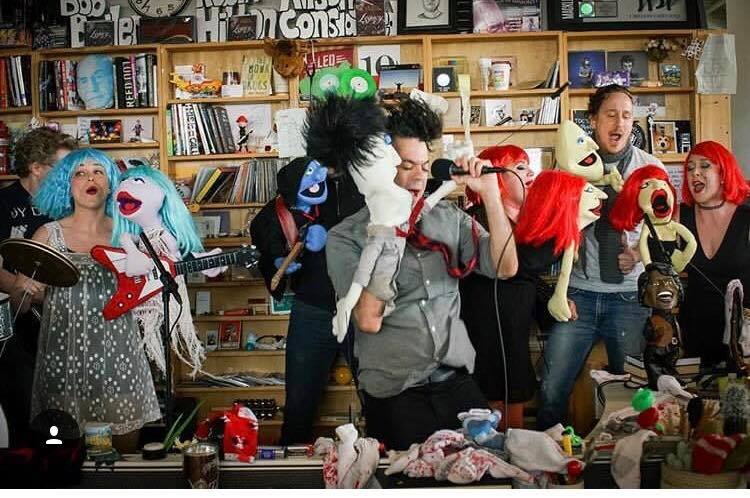 Tonight SCENES Live Sessions had the honor of hosting a concert by Fragile Rock, the band who brought puppets to life and gave them careers. And still, we laughed at their plight. We laughed at “Socks Are Murder.”

Fragile Rock is the emo band of puppets and humans. Their sound is punk and satire rock. They are six puppeteers, three musicians, two roadies and a band therapist. Founder Brently Heilbron is handler of the lead puppet singer Milo S. and he tells the band’s story best in his article “Brutality Television: Why you won’t be seeing Austin emo puppet band Fragile Rock on America’s Got Talent.”

After the band’s travails with NBC producers, Nick Cannon, Simon Cowell, Heidi Klum, Mel B, and Howie Mandel, he told Cannon: “You ain’t gonna see me cry. A tear don’t fall from a glued-on eye.”

Fragile Rock stands, plays and sings on their own merits, but they also remind me of The B-52s’ classic “Planet Claire.” Sometimes Milo S. sounds like Iggy Pop too.

In addition to his work with the band, Brently Heilbron is a comedy writer, and co-creator and co-host of the PBS program “Stand Up Empire” with Mike Wilson. The series documents the stand-up comedy scene in Austin, Texas. It’s a mix of interviews with comedians and their acts.